Girlboss founder and CEO, Sophia Amoruso, has announced that the women’s entrepreneurial media company will be launching its very own social networking site called Girlboss Collective. We can expect the site to be introduced in January 2019, and those interested in signing up will have to pay a membership fee. Though the price hasn’t yet been decided, Amoruso has confirmed the cost would be less than $15 per month.

While the idea of a digital networking platform for professionals can easily be likened to LinkedIn, Amoruso says her site will offer something different. Speaking to the Wall Street Journal, she explained: “LinkedIn is a place that was built for another era of work, when the work we did was very traditional. Their product is really centred on that type of work: ‘Here’s nothing about my character and everything about where I went to school, and where I worked.’”

At the time of writing there are more than 25,000 people who’ve joined the waitlist to sign up to the new platform, which, during its testing phase, will only be available in the U.S.. Its founding members are: Bozoma St. John, Chief Marketing Officer at Endeavor; Emily Weiss, Founder and CEO of Glossier; Beth Comstock, author of Imagine It Forward; Payal Kadakia, Founder and Executive Chairman of Classpass; Whitney Wolfe Herd, Founder and CEO of Bumble; Elaine Welteroth, Journalist and former Editor-in-Chief of Teen Vogue; and Jen Rubio, Co-Founder of Away. 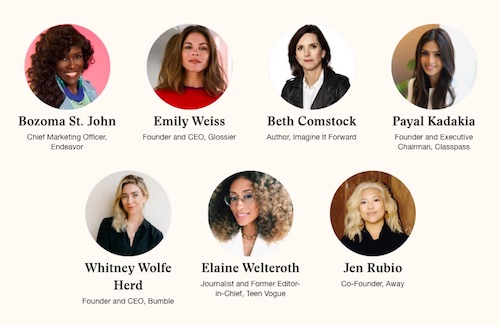 **4 business lessons we can learn from Netflix’s Girlboss**

The development of Girlboss Collective will be funded by a $3.5 million round led by Initialized Capital, the venture-capital firm co-founded by Reddit co-founder Alexis Ohanian.